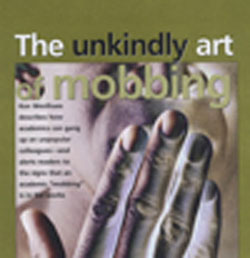 The Unkindly Art of Mobbing

Ken Westhues describes how academics can gang up on unpopular colleagues — and alerts readers to the signs that an academic "mobbing" is in the works.

Twenty years ago, Swedish psychologist Heinz Leymann gave the name mobbing to this terror, taking the word from Konrad Lorenz’s research on aggression in nonhuman species. Mobbing of alien predators and sometimes of conspecifics occurs among many birds and primates. Something about the target arouses a fierce, contagious impulse to attack and destroy. Mobbers take turns vocalizing hostility and inflicting wounds. The target usually flees. Sometimes it is killed and eaten.

Violent mobbing is endemic to our species. Harvard sociologist Orlando Patterson has analyzed lynching as a cannibalistic “ritual of blood.” Teenage swarming is similar, as in the murder of Reena Virk in Victoria, BC, in 1997. Her friends set upon her in a frenzy of bloodlust, reviled and tortured her, eventually held her head under water until she was dead.

Leymann studied the nonviolent, polite, sophisticated kind of mobbing that happens in ostensibly rational workplaces. Universities are an archetype. If professors despise a colleague to the point of feeling desperate need to put the colleague down, pummeling the target is a foolish move. The mobbers lose and the target gains credibility.

The more clever and effective strategy is to wear the target down emotionally by shunning, gossip, ridicule, bureaucratic hassles, and withholding of deserved rewards. The German word Todschweigen, death by silence, describes this initial, informal stage of workplace mobbing.

This is often enough to achieve the goal. Many targets crumble, flee to a job elsewhere, or take early retirement. Others surrender to the collective will, behaving thereafter like a dog that has been bested by another dog in a fight for dominance.

If the target refuses to leave or acquiesce, the mobbing may escalate to a formal outburst of aggression. Mobbers seize upon a critical incident, some real or imagined misbehavior that they claim is proof of the target’s unworthiness to continue in the normal give and take of academic life. A degradation ritual is arranged, often in a dean’s office, sometimes in a campus tribunal. The object is to destroy the good name that is any professor’s main resource, to expose the target as not worth listening to. Public censure by the university administration leaves the target stigmatized for life. Formal dismissal with attendant publicity is social elimination in its most conclusive form.

In its more advanced stages, mobbing is rare. Leymann estimated that fewer than five percent of ordinary workers are mobbed during their careers. The percentage among professors may be a little higher.

In his comprehensive book on academic freedom, York historian Michiel Horn recounts some famous cases from Canada’s past of what would today be called mobbing. Biochemist George Hunter’s firing from the University of Alberta in 1949 is one example. Historian Harry Crowe’s ouster from United College in Winnipeg in 1958 is another.

My own research has been on recent mobbings in academe. About two dozen of the hundred or so cases I have analyzed are from Canadian universities.

Because McGill University closed down its inquiry into her death, the 1994 case of Justine Sergent is especially noteworthy. She was a successful neuropsychologist there whose adversaries positioned her on the wrong side of the local research ethics board. Sergent received a formal reprimand and grieved it. The Montreal Gazette learned of the dispute from an anonymous letter and ran with the story. “McGill researcher disciplined for breaking rules,” the headline read. The humiliation was more than Sergent could bear. She and her husband, Yves, wrote poignant letters the next day and then committed suicide.

My most detailed study has been of the seven-year mobbing of theologian Herbert Richardson at St. Michael’s College, University of Toronto. His formal dismissal in 1994 was the most publicized in Canadian history. The case is unparalleled in its complexity and documentation, and in the insight it offers into current cultural trends.

All these cases are contentious. Stigma, once officially imposed, is generally thought to be deserved. Like everybody else, professors want to believe the world is just. Academic mobbings are as hard to correct as wrongful convictions in courts of law.

At a practical level, every professor should be aware of conditions that increase vulnerability to mobbing in academe. Here are five:
• Foreign birth and upbringing, especially as signaled by a foreign accent;
• Being different from most colleagues in an elemental way (by sex, for instance, sexual orientation, skin color, ethnicity, class origin, or credentials);
• Belonging to a discipline with ambiguous standards and objectives, especially those (like music or literature) most affected by postmodern scholarship;
• Working under a dean or other administrator in whom, as Nietzsche put it, “the impulse to punish is powerful”;
• An actual or contrived financial crunch in one’s academic unit (according to an African proverb, when the watering hole gets smaller, the animals get meaner).

Other conditions that heighten the risk of being mobbed are more directly under a prospective target’s control. Five major ones are:
• Having opposed the candidate who ends up winning appointment as one’s dean or chair (thereby looking stupid, wicked, or crazy in the latter’s eyes);
• Being a ratebuster, achieving so much success in teaching or research that colleagues’ envy is aroused;
• Publicly dissenting from politically correct ideas (meaning those held sacred by campus elites);
• Defending a pariah in campus politics or the larger cultural arena;
• Blowing the whistle on or even having knowledge of serious wrongdoing by locally powerful workmates.

The upshot of available research is that no professor needs to worry much about being mobbed, even in a generally vulnerable condition, so long as he or she does not rock the local academic boat. The secret is to show deference to colleagues and administrators, to be the kind of scholar they want to keep around as a way of making themselves look good. Jung said that “a man’s hatred is always concentrated on that which makes him conscious of his bad qualities.”

The target of intense, collective humiliation is ordinarily scarred for life.

Most of the mobbing targets I have studied were dumbstruck that such impassioned collective opprobrium could be heaped on them. They thought they were doing good work – as indeed they were, by standards broader than those locally in force. They trusted overmuch in reason, truth, goodness, and written guarantees of academic freedom and tenure. They missed the cue for when to shut up.

Mobbing is by now well researched and widely recognized as a workplace pathology. It is formally illegal in most European countries. Quebec enacted North America’s first anti-mobbing law in 2004. Such laws force mobbers to use subtler techniques.

Professors and other workers will continue to be mobbed from time to time. Most will be idealistic high achievers with loyalties higher than the local powers that be. Targets will be humiliated and punished – though less harshly than Socrates was. The academy has in some ways progressed.

Kenneth Westhues is Professor of Sociology at the University of Waterloo. His books on mobbing include Eliminating Professors (1998), The Envy of Excellence (2005), and The Remedy and Prevention of Mobbing in Higher Education (2006). For web resources on academic mobbing, google his name or go to mobbing.ca